My Cart
Free Shipping @ $250 Progress Bar
You Got FREE SHIPPING!
This Order Is Not Eligible For Free Shipping
Subtotal
Difference in DVI Connectors 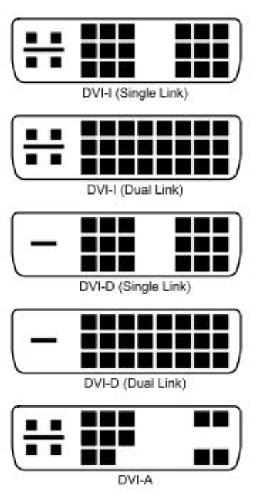 What is the difference in all the DVI connectors?

So, you are wondering what IS the difference between all the DVI connectors? There are 5 different DVI connectors. Read about them all here.

The DVI connector usually contains pins to pass the DVI-native digital video signals. In the case of dual-link systems, additional pins are provided for the second set of data signals.

As well as digital signals, the DVI connector includes pins providing the same analog signals found on a VGA connector, allowing a VGA monitor to be connected with a simple plug adapter. This feature was included in order to make DVI universal, as it allows either type of monitor (analog or digital) to be operated from the same connector.

The DVI connector on a device is therefore given one of three names, depending on which signals it implements:

The connector also includes provision for a second data link for high resolution displays, though many devices do not implement this. In those that do, the connector is sometimes referred to as DVI-DL (dual link).

The long flat pin on a DVI-I connector is wider than the same pin on a DVI-D connector, so it is not possible to connect a male DVI-I to a female DVI-D by removing the 4 analog pins. It is possible, however, to connect a male DVI-D cable to a female DVI-I connector. Many flat screen LCD monitors have only the DVI-D connection so that a DVI-D male to DVI-D male cable will suffice when connecting the monitor to a computer's DVI-I female connector.

DVI is the only widespread video standard that includes analog and digital transmission options in the same connector.[citation needed] Competing standards are exclusively digital: these include a system using low-voltage differential signaling (LVDS), known by its proprietary names FPD (for Flat-Panel Display) Link and FLATLINK; and its successors, the LVDS Display Interface (LDI) and OpenLDI.

Some new DVD players, TV sets (including HDTV sets) and video projectors have DVI/HDCP connectors; these are physically the same as DVI connectors but transmit an encrypted signal using the HDCP protocol for copy protection. Computers with DVI video connectors can use many DVI-equipped HDTV sets as a display; however, due to Digital Rights Management, it is not clear whether such systems will eventually be able to play protected content, as the link is not encrypted.